Learn about seven of the best locations you can visit in Wellington New Zealand to see wind turbines from up close or from afar.


Wellington is known for its wind, so not surprisingly, this wind is used to generate electricity, and wind turbines are used for this purpose. Some of these wind turbines are accessible, while others you can only view from afar.

There are several locations in Wellington that you can go to to see wind turbines.

The most popular walk to see wind turbines in Wellington is the Brooklyn wind turbine walk. I have yet to revisit this location since they last installed a new wind turbine.

The Brooklyn wind turbine was the first commercial wind turbine generator to be installed in New Zealand as a way to gain information from its operation and assess the benefits of wind for power generation. The wind turbine is managed by Meridian Energy.

The Brooklyn wind turbine is a popular Wellington landmark and has become an attraction for tourists and locals who make use of the opportunity to get some exercise. The old wind turbine was replaced in 2016 by a new one.

The second place where you can get close to a wind turbine is West Wind Recreation Area, which is a wind farm that is located in Makara, northwest of Wellington’s central business district. 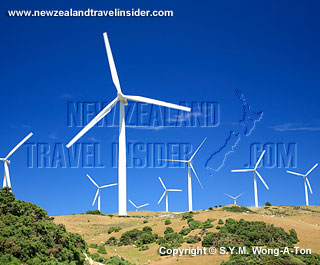 West Wind is managed by Meridian Energy, which has granted the public access for activities such as walking and mountain biking. At the time of writing, entry to the recreation area was free of charge.

West Wind adjoins and shares one trail – the trail that goes down the road to Opau Bay – with the Makara Walkway, which is managed by the Department of Conservation and which you can follow from West Wind all the way to Makara Beach.

You can get more information about West Wind Recreation Area by visiting the Meridian Energy website [meridianenergy.co.nz].

Unlike the Brooklyn wind turbine site, which is open 24/7, West Wind Recreation Area has opening and closing hours and is completely closed during lambing season. Note that access to the site is managed by an electronic gate, so you cannot get in whenever you want.

West Wind Recreation Area has several trails of different lengths and offers distant views of Kapiti Island and the South Island, in addition to many wind turbines.

The wind turbine you can get close to is located not far from the parking lot and from that location you can already get nice views. So you do not have to do the longer walks to be able to enjoy the best views this area has got to offer, but if you are into doing long walks near the coast, this might be the place for you.

Note that West Wind Recreation Area is a working farm, so you can expect to see sheep poo lying around on and around the trails. Also note that there is no public transport to West Wind, so you would have to rent a car or catch a taxi to go there.

If you cannot get to West Wind, the best alternative to see wind turbines would be Makara Peak.


Makara Peak is a hill that is located west of Karori in Wellington.

It is linked to Mount Kaukau via the Skyline Walkway, which is a 12 km (7.5 mi) combination of farm roads, single track, and open grassy areas traversing the ridges between the two hills.

Makara Peak is about 412 m (1352 ft) high and is the most western peak, so you can get the best views of wind turbines on the western hills from this location.

It also offers good views of mountains on the South Island, and you can even see a piece of Kapiti Island from afar.

Makara Peak Mountain Bike Park provides access to Makara Peak. It has a myriad of mainly mountain bike trails although hikers and runners are welcome on a few selected trails.

Do pay attention to which trails are shared trails and which are bike-only, though, to avoid collisions with cyclists.

The park is very popular with locals, so you can expect it to be very busy on weekends and public holidays.

The walk up Makara Peak is shared with mountain bikers and not that scenic. It is mostly a rough gravel road that is surrounded by bush until you reach the top where you get the views.

You can reach Makara Peak by driving to any one of the entrances of the Makara Peak Mountain Bike Park.

At the time of writing, entry was free of charge and there are gates/bars but only for cars; pedestrians can walk in freely.

If you are going by bus, you can catch bus 2 to Karori, get off and the last bus stop, and then walk to the entrance of the Makara Peak Mountain Bike Park on St. Albans Avenue.

Mount Kaukau is a popular walk with visitors and locals alike. While it is not in the center of the city, it provides quick and relatively easy access to a lookout on Mount Kaukau where you can get an almost 360-degree view of Wellington.


This view includes the mountains on the South Island, Wellington Harbour, Pencarrow Head, and wind turbines.

The trail going up Mount Kaukau is well maintained with steps but can get a bit muddy after heavy rain and slippery at the top, especially in winter and spring.

This location is easily accessible even if you do have a car. The quickest way to get there is by catching a train from Wellington train station. You should be there within 15 minutes, and the neighborhood where the start of the walk is located is very nice and quiet.

Mount Kaukau links up with other hills and peaks around Wellington via the Skyline Walkway, so theoretically speaking, you could walk to other locations from Mount Kaukau to see more or get different views of wind turbines.

If you want a fairly quick walk up a hill to get nice views of Wellington and some wind turbines from afar, Johnston Hill would be the hill for you.

Johnston Hill Reserve is a public recreation area and scenic reserve that is very popular with locals – you will not see many tourists here.

Locals use it to get exercise or for walking their dogs. Johnston Hill Reserve has remnants of native bush just like Otari-Wilton’s Bush.

Johnston Hill Scenic Reserve has several entrances but you can easily get to the entrance off Hatton Street in Karori by catching bus 2 to Karori, getting off at the Marden Village bus stop, and then walking to the end of Hatton Street.

If you are going by car, there is a small parking lot at the end of Hatton Street near the entrance for the walk.

The walk up Johnston Hill is not that long – you can be out and back in 45 minutes – nor that strenuous, and you get pretty good views for not much effort. The trail first goes through bush and then opens up as you get closer to the top.

One of the peaks you can walk to from Mount Kaukau is Colonial Knob. It is a very long walk, though.

The easiest way to get to Colonial Knob is to travel to Porirua, which lies about a 25-minute drive north of Wellington. You could also catch a train from Wellington and then walk to one of the entrances for the walk.

Colonial Knob offers very distant views of wind turbines, so it is not a walk I would highly recommend if you want to see wind turbines. But because the peak is high at about 468 m (1534 ft), you can see quite far and also get views of the top of the South Island.

The walk up Belmont Trig is not very scenic, but once you reach the top, you can see all the way to Porirua and also get views of Kapiti Island and the South Island because it is a high peak (457 m / 1499 ft).

Belmont Trig is a little higher than Mount Kaukau and offers better views to the north and east.

But as mentioned earlier, the views of wind turbines are very distant, so it is not a place I would recommend if you want to see wind turbines.

Belmont Trig is part of Belmont Regional Park [gw.govt.nz] – just like the Korokoro Dam – and is located in Lower Hutt, which lies northeast of Wellington City.

Belmont Regional Park spans open hills and bush covered valleys between the Hutt Valley and Porirua. The Belmont Trig Track is a fairly broad gravel road that is used by hikers, but mountain biking and horseback riding are activities that are also done in the park.

You will be able to enjoy views of hills that are covered with native bush as you make your way to the top. While the Belmont Trig walk is all uphill or all downhill with some steep sections, it is not a very strenuous walk.

Belmont Trig is probably also the one walk that is the most difficult to access because if you do not have a car, you would have to catch a bus or train from Wellington City to get to Petone Station in Lower Hutt and then catch a second bus to get to a bus stop that is about a 20-minute walk away from the start of the walk.

Note that the park has opening and closing times although I was able to get in before the opening time because the gate is not controlled. As an added bonus, you can visit a small waterfall at the start of the walk.


This article falls under Day Walks.

Note: Walking tracks and trails can be changed or get closed. The information presented here was accurate when it was gathered.

Get a detailed description of the Lake Benmore Peninsula track and see photos and a video of the stunning mountain and lake scenery offered by this walk.

Learn how to easily get to Mount Kaukau and see a video of this lookout walk that offers scenic views of Wellington, the South Island, and wind turbines.

Learn how to get to and what to expect from the walk to Mangatini Falls on the Charming Creek Walkway on the West Coast of the South Island of NZ.

Get a detailed description, photos, and a video of the walk to the Brooklyn wind turbine in Wellington, which offers scenic views of the city and surroundings.

The Kea Point Track is one of the shorter walks in Mount Cook National Park that offers good views of Mount Sefton, Mueller Lake, and Mount Cook.

Get a full description, photos, and a video of the Lake Dispute Walkway near Queenstown, which takes you up to a high-country lake.