That’s mostly because I’m crazy about mountains and most of the mountains are located on the South Island, which is why it is my favorite New Zealand island.

When you visit New Zealand and are deciding where to go, it is just a matter of what you like or what you’re looking to do in New Zealand that will push you to visit the North Island, the South Island, or both.

On my first trip to New Zealand, I visited both islands because I wanted to get a taste of everything that New Zealand has got to offer.

In keeping with my own tradition, I’ll now give you ten good reasons to visit the North Island of New Zealand…

So what makes a beach a best beach?

In my opinion, a nice beach should have clean light sand and clear blue or bluegreen water.

So where do you find such beaches on the North Island of New Zealand?


Look for any beach starting from the top of the North Island in Northland, and just follow the northern and then eastern coastline of New Zealand.

If you do this, you’ll encounter the locations that have the best beaches in New Zealand:

But the most beautiful beaches are undoubtedly in Northland.

If you are in the lower part of the North Island, the Kapiti Coast is nice to drive along. You can also go for a long walk along the coast in Queen Elizabeth Park and get views of Kapiti Island from there. If you do not rent a car when you visit New Zealand, you can also catch a train from Wellington and easily access this beautiful location.

Another coastal location that is worth mentioning but that is somewhat challenging to access is the Pencarrow Lighthouse walk not far from Wellington city center.

Many people visit New Zealand or are attracted by it because of the Maori culture. 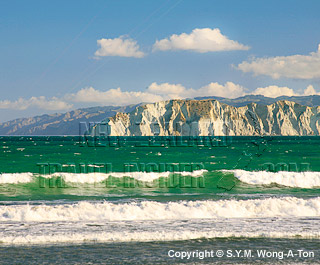 Beach in Gisborne on the North Island of New Zealand

You can also find several living in the Gisborne region.

So to experience the Maori culture, you need to be on the North Island.

For the best Maori cultural shows, head to Rotorua.

I don’t want to confuse you with geological and geophysical mumbo jumbo, so I will try to keep the explanation simple…

The North Island of New Zealand is positioned above a geothermal system, allowing the Earth’s crust to be weakened and rocks to be heated up.

This manifests itself as geothermal activity in the form of hot springs, mud pools, geysers, and volcanoes at the surface.

The two best places to visit to experience geothermal activity physically in the form of hot pools are Rotorua and the Coromandel Peninsula.

If you want to experience geothermal activity visually, Wai-O-Tapu Thermal Wonderland is a must-do.

While there are a few other thermal parks in the Central Plateau, this one is the most beautiful one.

For the same reason that has been specified under the previous point, the North Island has a multitude of volcanoes, some which are better known than others.

My favorite mountain (and volcano) on the North Island is undoubtedly Mount Egmont in Taranaki.

However, Mount Ruapehu is not to be missed either, because it becomes a popular place for skiing in winter in New Zealand.

While Marlborough, which is located on the South Island, is New Zealand’s most significant wine-producing region, Hawke’s Bay and Gisborne on the North Island come in on a good second place. Wine is also produced in the Wairarapa, which is located not too far from Wellington.

So if you’re into wine-tasting, the North Island can also give you what you’re after.

The main port of entry for international flights bound for New Zealand is Auckland. Christchurch can be seen as the main port on the South Island, but it gets much less air traffic than Auckland.

7. The capital city is located on the North Island

After reading the sixth reason for visiting the North Island, you might be wondering why Wellington is the capital city and not Auckland?

Well… I wondered the same thing when I first came to New Zealand.

But did you know that Auckland used to be the capital city of New Zealand?

That’s a crucial bit of info to know to understand why Auckland is the largest city of New Zealand, why so many people live there, and why so many good things – such as shops – are located in Auckland.

People also flock to Auckland and the rest of the top of the North Island because of the good weather and warm temperatures.

But even if Auckland were still the capital city of New Zealand, you would still have to go to the North Island to visit the capital.

Auckland is home to many of New Zealand’s top fashion designers. Boutiques are located in the heart of the city, and several large malls and outlets are spread throughout suburbs. Auckland offers the largest variety of shops in whole of New Zealand.

But Auckland does not only excel in fashion and clothing. There are also several markets that attract bargain hunters looking for fresh food, arts and crafts, clothing, and used goods.

While you can find good shops in Wellington and Christchurch, they aren’t as good and plentiful as those in Auckland. And most of the time when items are difficult to get in other parts of New Zealand, you’re almost guaranteed that it will be available for purchase in Auckland.

So if you want to go shopping, Auckland on the North Island of New Zealand is the place to be.

While Auckland has the best shops, Wellington has the best food, except for American fast food for which you need to be in Auckland.

Wellington is the culinary capital of New Zealand.

It has become known for its large amount and variety of cafés and restaurants, which are spread all over the city and which offer the finest food, wine, and coffee.

If you want good food from different culinary backgrounds and cultures, you need to be in Wellington. You can try out one or more restaurants and bars that are located along Courtney Place in Wellington.

Auckland is known as the City of Sails. And for a good reason! It’s waterside location makes it ideal for pursuing sailing and other activities in and on the water.

You can also do a good bit of sailing in the Bay of Islands, which is located on the east coast of Northland.

And like Auckland, Wellington is also located at the water’s edge, so not surprisingly, sailing also takes place in Wellington’s harbor.

So for fun on the water, head to the North Island.

Final words on ten reasons to visit the North Island

I hoped you enjoyed getting these reasons to visit New Zealand’s two largest islands. I certainly enjoyed coming up with them.

Side note: I could come up with more if I wanted to, but these are generally the reasons many people are attracted to and visit New Zealand.

Get 10 tips on how you, as a female traveler, can prepare for solo travel in New Zealand, and get the inside scoop on how I myself travel New Zealand alone.

Having a hard time deciding between Christchurch and Wellington? Learn how these two New Zealand cities differ and which one would appeal more.

Having a hard time deciding whether to stay in Queenstown or Wanaka? Learn how these two South Island cities differ and which one is best for you.