Learn when it is autumn in New Zealand, what the weather is like in autumn, what to wear, and where to go to see fall foliage in New Zealand.

The months that make up autumn in New Zealand are March, April, and May.

Autumn can not only be one of the most gorgeous times to visit New Zealand but also one of the quietest times, except for places like Arrowtown, which is small and tends to get very busy toward the end of April.

Most of the summer tourists have come and gone by the time March arrives, but the weather is still good enough to be out and about.

However, do keep in mind that rain tends to increase and temperatures tend to decrease the further into autumn you go.

Temperatures and weather in autumn in New Zealand

Temperatures and daylight hours continue to decline from February till the end of autumn. March brings approximately 13 hours of daylight, April 11.5 hours, and May 10 hours.

Average daytime temperatures can still be pretty warm in March – up to 29 degrees Celsius (84 degrees Fahrenheit) in some places – but they soon drop to the low twenties toward the end of May. 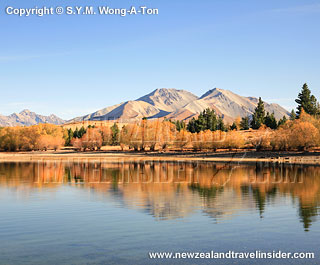 The temperature at night can also drop below zero in some places, especially on the South Island.

But generally you should expect nighttime temperatures to be in the low teens and lower.

All in all, March tends to be the warmest month and May the wettest month.

By the time April and May arrive, things can get a bit chilly and you can start to expect to see dustings of snow on the mountains.

What to wear in autumn in New Zealand

The weather is very changeable and unpredictable in autumn and especially when you are in mountainous regions such as Queenstown-Lakes District (Queenstown, Wanaka, Kingston, and Arrowtown) and Mackenzie Country (Tekapo and Mout Cook).

While the temperatures are not as high as they are during summer, you won’t require a thick winter jacket in autumn.

However, it is always good to walk with warm clothing such as a fleece sweater or jacket, just in case it suddenly gets cold. Rain is very common in autumn, so also carry a rain jacket.

It is best to wear clothes in layers in autumn so that you can easily add or remove layers as the weather becomes colder or warmer.

Where to go to see autumn colors in New Zealand

While deciduous trees are not abundant in New Zealand, you can still enjoy the changing of the colors of leaves on trees in several parks and gardens throughout the country as well as in people’s yards, densely populated cities such as Christchurch, and in selected locations outdoors such as Arrowtown, Wanaka, and further down in Central Otago.

You can read more about the best places to see autumn colors in New Zealand.

In addition, one of New Zealand Travel Insider’s readers reported back on fall colors in Christchurch and from that fall foliage report we now know that Hagley Park is a definite must-see in autumn.

You can stay in any motel near Hagley Park in Christchurch during autumn, not to miss out on the autumn colors.

When to visit New Zealand for autumn colors

This is probably the most important question to ask and have an answer to before planning an autumn trip to New Zealand.

Autumn colors are and remain difficult to predict because they depend on so many factors that have to do with the weather during the entire year preceding the fall season.

However, there are a few guidelines you can follow and that can help you decide on the dates for your New Zealand autumn trip:


Photos of autumn in New Zealand in a video

This video is a collection of images that were taken in autumn. The photos should give you a good idea of what autumn looks like in New Zealand.