Learn which airports on the North and South Island are used when traveling to New Zealand and how you can travel between the New Zealand islands.


The first thing you’ll need to make a decision about when traveling to New Zealand is the island you’ll want to visit. And if you’re into saving time, it might be best to book a direct flight to your New Zealand island of preference.

There are two major airports – major by New Zealand standards – you can fly to if you want to visit New Zealand.

Most international flights arriving in New Zealand land at Auckland Airport. So if you live in America or Europe, chances are great that you’ll be able to catch a flight to Auckland.

Auckland Airport can be seen as the main airport of New Zealand.

If you’re flying from Australia to New Zealand, you’ve got a few more options where landing at airports in cities other than Auckland or Christchurch are concerned.


Travel between the North and South Island of New Zealand

The North and South Islands of New Zealand are not connected to each other – although they were thousands of years ago – so you might be wondering how you can get from the North Island to the South Island or vice versa?


You have two options here: You can either travel by air or by boat. If traveling by air, you can typically fly from Wellington at the bottom of the North Island to Blenheim or Nelson at the top of the South Island.

If traveling by boat, you can catch a ferry from Wellington to Picton, which is also located at the top of the South Island.

Traveling by air saves time – a flight from Wellington to Blenheim typically lasts only 25 minutes and to Nelson only 35 minutes – while catching the ferry will eat up at least 3 hours of your time.

However, I do recommend going by ferry if you’re in New Zealand for the first time, because it is an experience of a lifetime, especially when cruising into Marlborough Sounds.

However, do pick a nice day for this trip over, because rough seas on very windy days can be scary when you are in a boat.

In addition, flying to a big city is generally cheaper. On the North Island, such a city would be Auckland and on the South Island, Christchurch. 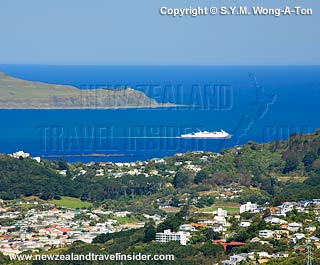 There are two ferries with which you can make the journey over from Wellington on the North Island to Picton on the South Island and back: the Interislander and Bluebridge Cook Strait ferries.

A one-way ticket can cost anywhere between $50 and $100, and it takes between 3 and 3.5 hours to go from the North Island to the South Island with a ferry.

If you are going to rent a car in New Zealand, please be aware that some of the larger car rental companies do not allow their cars to be taken on a ferry from one island to the other.

The general procedure would then be to drop off one car in Wellington, cross over with the ferry but not the car, and then pick up another car in Picton or vice versa.

You do not have to make two separate car reservations. The switching of cars when traveling between the North and South Islands will automatically be included when you make one reservation that includes a pick-up on one island with a drop-off on the other.

Travel north to south or south to north?

Whether you travel from the North Island to the South Island or vice versa is a matter of preference. Most trips start on the North Island, because it is the most accessible island from outside New Zealand.

Most international flights land at Auckland International Airport, which is located on the North Island, but you could also choose to fly to Christchurch, Dunedin, or Queenstown, start your trip on the South Island, and then travel from south to north.

Most international flights to Christchurch, Dunedin, and Queenstown originate from Australia, so if you are living in Australia or flying to New Zealand via Australia, you might have the option to fly directly to the South Island.

Christchurch is probably the best city to fly to if you decide to start in the south, because it offers the most services.

The supply of rental cars, for example, is greater in Christchurch than it is in Dunedin or Queenstown.

On my first solo trip to New Zealand, I flew to Auckland, caught a ferry from Wellington to Picton, and then flew from Christchurch to Auckland with a domestic flight.

Find out whether December is a good month to visit New Zealand, what you can do, where you can go, and what the weather is like in December.

Find out whether May is a good month to visit New Zealand, what you can do, where you can go, and what New Zealand’s weather is like in May.