Get info on what you need to know about driving in New Zealand with ten tips to make it easier for you to drive and stay on the left side of the road.

So when I moved to New Zealand, I had to shift my thinking to driving on the left instead of the right. It is not a difficult thing to do, though.

If you are still not convinced that it is pretty easy to drive on the left, coming from driving on the right, here is more…

When I visited New Zealand alone for the first time as a tourist, I had only had my driver’s license for less than two years, so I was a fairly inexperienced driver. And since I had not driven much in the country where I used to live, you could see me as someone who was fresh out of driving school.

In addition, I had to do all of the navigation myself. With navigation I mean the following activities: read maps, read road signs, look for street names, etc. etc., to get from one place to the next. I did not have a GPS, but I still managed to drive in New Zealand, and so can you.

You do not have be afraid of driving in New Zealand, but don’t be nonchalant about it either, because tourists have been causing many accidents in the last couple of years so have been getting a bad name in New Zealand.

In this article, I’ll make the process less scary by telling you which road rules to pay special attention to and give you ten tips you can use to stay safe on the road.

While you do not have to read the entire thing because many of the rules are the same internationally, I would pay special attention to the following sections:

Pay special attention to the give way rules for intersections because intersections can be deadly in New Zealand. Note that if you see a stop sign, you must stop, look, and then drive; not slow down, look, and keep driving.


Also take a look at the section about one-lane bridges, especially if you will be visiting the South Island of New Zealand, because there are several one-lane bridges to cross rivers and creeks on that island.

Most roads in New Zealand have two lanes. Highways may have an extra passing lane in some areas.

Motorways around larger cities such as Auckland, Christchurch, and Wellington generally have more than two lanes.

Therefore, it is safe to assume that you’ll be driving most of the time on roads with oncoming traffic.

Most roads in New Zealand are sealed or paved. The only roads that are unsealed are usually rural roads and low-volume roads, so you won’t have to rent a 4WD vehicle or SUV to get around unless you plan on driving on backcountry roads that are gravel roads.

10 Tips for driving in New Zealand

For winter driving tips, you can head over to the Winter in New Zealand page.

1. Choose an automatic car instead of a manual car


I rented a car with an automatic transmission when I first visited New Zealand, and I still do whenever I’m traveling around the country.


Because I learned to drive a stick shift by using my right hand to shift gears, here in New Zealand I would have to use my left hand to do the same, which would force me to concentrate more on the shifting of gears rather than on the driving itself.

While I’ve heard from similarly challenged people that it is easy to learn, I’ve never really tried it.

If you are fortunate enough to have someone sitting next to you who can tell you which turn you should take next, so who is doing the navigation for you, you may want to rent a manual car because they are generally cheaper than automatic cars.

Otherwise, I’d recommend renting a car with an automatic transmission.

2. Learn the NZ Road Code before you arrive in New Zealand

Learn the rules of the road before you arrive in New Zealand. Learn what the road signs mean and be prepared for differences with driving in your own country.

Most of the road signs and rules in New Zealand are the same internationally, so it is highly likely that you will see more similarities than differences in the road rules and signs.

Nonetheless, brush up on the New Zealand Road Code before you come over.

Although most car rental companies will provide you with maps, these maps do not have enough detail on them to help you find minor roads or streets in a big city like Auckland.

You do not always have to buy maps before you arrive in New Zealand. Road maps can sometimes also be purchased at gas stations.

4. Map out your route before you start to drive

Before heading out or even starting to drive, map out the route you’ll be taking, and then memorize it.


This can be tricky when you’re in a large city like Auckland where there are many roads so many decisions to make.

5. Memorize the locations of large cities in New Zealand

Memorize the locations of large cities on the map of New Zealand and their proximity to other cities.

To reach your destination, most of the time, you will only need to know the names of larger cities because those will be listed on the large green signs at the sides of roads and highways.

So by memorizing the map of New Zealand, you’ll know in which direction to drive.

6. Use landmarks, the sun, a compass, or a GPS to help you navigate

7. Know how long a drive will take before you hit the road

Know how long it can take to get from point A to point B and plan your journey accordingly.

Most good road atlases will list the approximate driving times and distances between the larger cities in New Zealand.

In my own experience, the driving times calculated by Google Maps are generally too short. So add at least 30 minutes to those times.

If you’re not used to driving 11 hours nonstop in your own country, I don’t recommend coming to New Zealand and doing that over here.

Take your time while driving from city to city. And remember that while New Zealand is a small country compared to, for example, Canada or the United States, it can take up to seven hours to drive from Christchurch to Queenstown, for example.

Roads can sometimes be long, straight, and boring, but they can also be very hilly and winding, which can get you tired. And don’t forget you’ll be driving on roads that are completely unknown to you. Don’t rush and take all the time you need.

8. Rest adequately before you drive and between long drives

If you’re experiencing driver’s fatigue, which you might if you haven’t had enough sleep or have been driving for a long time, take a break.

It is recommended to take a 10-minute rest break every hour when driving. You can stop at picnic spots, a roadside café, or a lake to take a break from driving and rest before continuing your journey.


Driving tired is almost as bad as drinking and driving.

9. Don’t panic if you get lost

While it is difficult to get lost in New Zealand, it can and does happen. 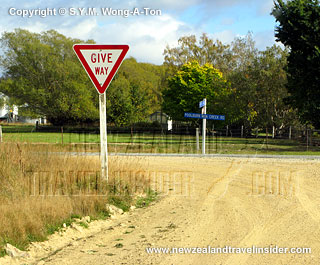 Give way sign on a dirt road in New Zealand

The best thing to do if you cannot figure out where you are is to stop and ask for directions.

The only place I’ve gotten lost is while driving in Auckland.

Other than that, even when I thought I was lost, I’ve always been able to find my way again just by following my instincts.

Be courteous on the road and please have consideration with other road users such as cyclists and farmers. If you know you’re going to be drinking, let someone else drive.

Some car rental companies require you to provide a list of the people who will be driving the car. They usually ask for this information when you pick up the car.

So if you are traveling with more people and know you might drink, remember to assign a designated driver when you pick up the car.

11. Bonus tip to stay on the left side of the road

Whenever you’re driving on a two-lane road, keep the center line on your side (the driver’s side) of the car. This will automatically help you stay on the left side of the road.

I’d like to share the biggest challenge I’ve encountered while driving for the first time on the left side of the road in New Zealand.

The easy part will be following cars, that is, if there are cars ahead of you, you can just follow them and you’ll be alright – it will be easy to stay on the left side of the road.

The difficult part will probably be getting back on the road after stopping somewhere. You must remind yourself to get in the left lane when you get back onto the road.

I can remember a funny situation near Whakapapa after I had briefly stopped at the visitor’s center and then got back onto the road, only to catch myself driving on the right side of the road. Luckily I became aware of this just after a few seconds of starting to drive.

Don’t let the same thing happen to you because you can get into an accident that way. Luckily the road was empty at the time it happened to me.


Video about driving in New Zealand

Last but not least, this 7-minute video explains what to do at intersections when driving in New Zealand. For a complete overview of the driving rules in New Zealand, please refer to the New Zealand Road Code website.

Enjoy New Zealand when you come over, don’t be afraid to drive in New Zealand, but please don’t do anything you would not do in your own country of residence.

New Zealand is an attractive travel destination but crime has been on the rise. Does this mean that you have to avoid visiting this beautiful piece of Earth?

Find out what the current road conditions from Christchurch to Queenstown are at any time of the day, either online or offline.

Learn which ten places are very popular with tourists who visit New Zealand.