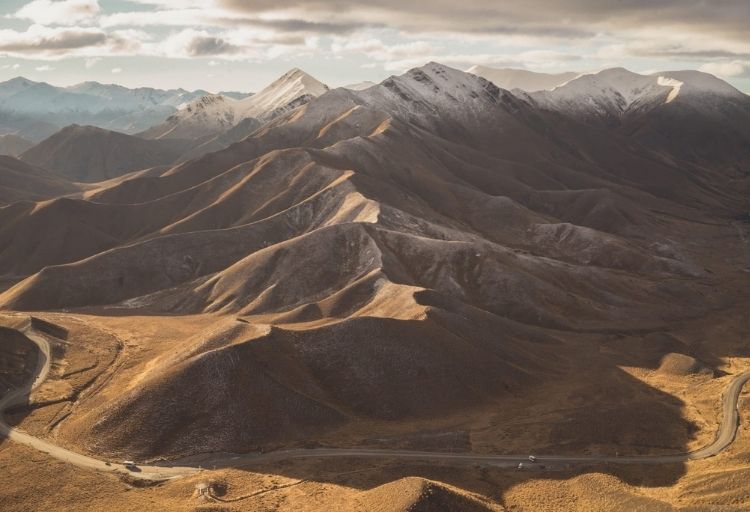 Learn how you can put together a travel itinerary for the South Island and come up with a realistic number of days to see this New Zealand island.

While this might not seem much to some people, please remember that the roads in New Zealand are not all straight where you can turn on the cruise control and drive without thinking about it.

On the contrary, the South Island has more mountains than the North Island, so you’re bound to be slowed down by mountain passes (for example, Lindis Pass), one-lane bridges, and many winding roads.

While it is possible to drive comfortably from north to south on the South Island in two days (one-way), you won’t have much time to enjoy the scenery.

So if you want to come to New Zealand to only drive and look around and not stop much, you could see the South Island in two days.

However, I’m pretty sure that you would want to enjoy the beautiful mountains, lakes, rivers, and waterfalls the South Island has got to offer, so let’s try to come up with a better estimate, shall we?

How To Plan A South Island Trip Realistically

If you want to do more than just drive and stop once in a while for an activity or a photo, the following is a much better plan to really enjoy your trip to the South Island of New Zealand:

If we take the Autumn on the South Island trip for a moment, my travel dates would be determined by the months for the best autumn colors in New Zealand.

Once I have a time period to work with, I would research where to go on the South Island to see autumn colors.

And once I have the locations, I would decide on the cities or towns to stay in. The choice is mostly determined by the amount of facilities that are available in or nearby a city or town and the distance to the locations I want to visit.

Your selection of a time period would be mainly determined by what exactly you would like to see or do in New Zealand.

If you are visiting to see snow or ski, you must come in winter; if you want to see fall foliage, autumn would be your best bet; and if you want to catch blossoms, spring would be the best time.

While I have written about when it is the best time to visit New Zealand, New Zealand temperatures, and the least rainy places in New Zealand, in the end, it is you who must decide what is best for you.

If it is your first time visiting New Zealand, you may want to put a Highlights of the South Island trip together that is, for example, based on the must-see and must-do things on the South Island.

The South Island is known for its mountains, lakes, glaciers, beaches, and national parks. Below you will find a sample itinerary.

If you fly to Christchurch, which has an international airport, you could do a counterclockwise driving trip, where you would first head to Kaikoura and spend two nights to see wildlife such as seals.

Then you could drive to either Nelson or Motueka and spend three nights there to visit Abel Tasman National Park for gorgeous beaches or Marlborough Sounds for impressive coastal scenery.

Then you could head down the West Coast and stay in Franz Josef or Fox Glacier for two nights and do a glacier hike on your second day there.

Note that the drive from Motueka to the glaciers is a long one. You could stop on your way down south to visit the Punakaiki Pancake Rocks.

Next up is Queenstown to spend three nights. Book a Fly-Cruise-Fly tour to Milford Sound to save time; I guarantee that such a half-day tour alone will make your entire trip worthwhile.

You’ll see mountains on your way in and out of Milford Sound and marvel at the grandeur of Milford Sound. You can book such tours at The Station, which is a booking center in Queenstown.

Then drive up north to Dunedin for another two nights. On your way to Dunedin, stop in the Catlins to see waterfalls (for example, Matai Falls) and beaches. In Dunedin you can do a side trip to the Otago Peninsula to see wildlife and/or gorgeous coastline and beaches.

Drive up to Oamaru with a short stop at the Moeraki Boulders on your way to Tekapo. Spend two nights in Tekapo to marvel at the scenery around Lake Tekapo and in Mackenzie Country when you drive up or walk up Mount John, visit Lake Pukaki (a must-do), and even drive to Mount Cook National Park to spend a day there walking and taking in the scenery.

Then head back to Christchurch with an optional side trip to Arthur’s Pass or Banks Peninsula.

And finally, if you’re visiting from overseas and have had a very long flight, I would recommend adding one day at the beginning of your driving trip to rest when you arrive instead of immediately jumping into a car to drive.

It is safer and you’ll enjoy your trip more this way. There are several hotels and motels near Christchurch Airport where you can stay, so that you can easily pick up a rental car in the morning at the airport.

Your Highlights of the South Island would come to a grand total of 17 days. This would allow for at least one day in each city or town to enjoy the scenery.

Final Words On How Many Days To See The South Island

Do not try to see everything on the South Island during one short trip of a week or two, because it is close to impossible without rushing and actually having fun.

There are many people who have lived in New Zealand for years and who have still not seen every corner of the South Island. I know I haven’t.

The South Island of New Zealand is one of the most gorgeous islands in the world and offers a huge amount of variety where nature is concerned.

I’ve been to many places on this planet, and nowhere compares to the South Island. So if it is on your bucket list of places to see, I’d say, “Go for it!”.

Read Next —> How Many Days To See The North Island Of New Zealand?

Learn which airports on the North and South Island of New Zealand are often used when traveling to New Zealand and how you can travel between the New Zealand islands.

Learn when it is autumn in New Zealand, what the weather is like in autumn, what to wear, and where to go to see fall foliage in New Zealand.

Learn what November in New Zealand has got to offer, what the weather is like, where you can go, and what you can do in this month in late spring.