Find out whether February is a good month to visit New Zealand, what you can do, where you can go, and what the weather is like in February.


February marks the end of summer in New Zealand.

Because the summer holiday for New Zealanders in December and January has come and gone, February is busy like January but not an extremely busy time to visit New Zealand.

Tourists are becoming more and more aware of the fact that while they might miss the hot weather of January, they can still catch its tail end in February because it is still summer in New Zealand.

If I had to choose a summer month to visit New Zealand, it would be either December or February with a slight preference for February because less rain tends to fall in February than in December or January.

Things to do in February in New Zealand

Any activity where dry and warm weather would be an advantage would be perfect to do in February.

Activities you can do in February include hiking, kayaking, swimming, sailing, mountain climbing, mountain biking, or scenic driving.

For example, February would be a very good month to do one or a couple of the nine great walks of New Zealand.

Places to visit in February in New Zealand

February is a good month to visit beaches, coastal areas, and areas that generally receive a lot of rain such as, for example, the West Coast or Fiordland National Park.

All of those places offer relaxed sightseeing or activities such as sailing, kayaking, swimming, or hiking. And of course you could also venture inland to do scenic drives or city strolling.

The places you could visit in February in New Zealand are countless, really. It is still summer, so almost every place is open, except for ski fields.

But even with the ski fields being closed, it is highly likely you can drive up or hike up to a ski area to enjoy scenic views from the top of a mountain.

February brings slightly cooler temperatures than January to New Zealand but warmer than March. However, the temperature difference between January and February is not that large (1 – 5 degrees Celsius difference).

Compared to January, February is drier, so it is the summer month with the least amount of rainfall. 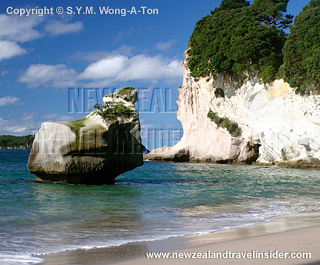 Temperatures in February tend to fluctuate between 3 and 31 degrees Celsius (37 – 88 degrees Fahrenheit), depending on where you are located in the country.

Typically on the North Island, temperatures fluctuate between 8 and 31 degrees Celsius (46 – 88 degrees Fahrenheit).

The times mentioned above are for Wellington and Queenstown and may vary depending on your location in New Zealand.

Having a hard time deciding whether to visit Wanaka or Arrowtown? Learn how these two South Island cities differ and which one is best for you.