January is a good month to visit New Zealand, but how good? Also learn where you can go, what you can do, and what the weather is like in January.


January is mid-summer in New Zealand.

The summer holiday for New Zealanders falls in December and January, so you can expect January to be a busy month.

The weather is pretty stable and warm – sometimes even hot – so generally, tourists know this and tend to take advantage of it en masse, including New Zealanders themselves.

So if you tend to shun crowds, you may want to choose another summer month to visit New Zealand. For example, February.

Things to do in January in New Zealand

January is a warm month so a good time to be on or in the water. And there is also where you will see most New Zealanders.

January is peak tourist season in New Zealand, so almost all tourist facilities are open except ski fields. So you can do almost anything in January.

Popular activities to do in January include hiking, kayaking, swimming, sailing, surfing, mountain climbing, mountain biking, scenic driving, bungy jumping, fishing, or just sitting at a beach or a lake. Speaking of the latter, you may see a lot of people camping around lakes in late December and early January.

And just like February, January would be a very good month to do one or a couple of the nine great walks of New Zealand.

Places to visit in January in New Zealand

You can go anywhere that has nice beaches or lakes in January.

Do keep in mind, though, that sandflies can be a real pest in summer but also in autumn in New Zealand. I speak from experience when I say that they sting badly and the bumps they leave behind on your skin do not look sexy.


You can find nice beaches in Northland (upper North Island), the northeastern coast of the North Island (Coromandel Peninsula, Tauranga, Ohope near Whakatane, Gisborne, and Napier), Abel Tasman National Park and Golden Bay (top of the South Island), and near Dunedin and the Otago Peninsula.

Beaches on the West Coast are not white and sandy, but more rocky, if that is what you prefer.

Generally, they are not suitable for swimming, but you can stroll around or just enjoy the sound of the breaking waves.

Lakes are everywhere in New Zealand but more so on the South Island than on the North Island. I’d say to just look at the map of New Zealand and pick one in your neighborhood.

Most lakes in New Zealand are scenic in a way but not all of them. Good lakes to visit include Lake Taupo on the North Island for its size (it looks like an ocean) or famous lakes on the South Island such as Lake Tekapo or Lake Pukaki. 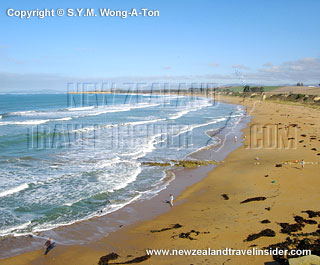 Beach near Dunedin in New Zealand

And don’t forget that summer is a great time to walk up mountains. There are a good few, for example, in Wanaka: Mount Roy, Diamond Lake walk, and Mount Iron. You can also try Queenstown Hill in Queenstown.

But you could also head to the Mackenzie area and walk up trails at Mount Cook National Park or at Lake Tekapo (Mount John), or visit the nearby Waitaki Valley and do the Lake Benmore Peninsula walk.

The sky is the limit really as to where you could go in January.

So you should not use the temperature as a determiner for choosing to visit New Zealand in January or February.

On average, you can expect daytime temperatures to be in the mid- to high twenties with some places shooting up in the low thirties and other places such as, for example, Wellington in the low to mid-twenties.