Find out whether July is a good month to visit New Zealand, what you can do, where you can go, and what New Zealand’s weather is like in July.


July is mid-winter in New Zealand.

Because the school holidays fall in July, it is generally a busy month to visit New Zealand, especially if you are planning on visiting the ski fields.

If you are looking for a quieter month in winter to visit New Zealand in which you can still enjoy snow on the ski fields, you may want to look into postponing your trip until August.

Driving in New Zealand in winter can be hazardous, but if you take the necessary precautions and drive carefully and attentively, you should be fine.

Things to do in July in New Zealand

The main tourist activities in July are skiing, heliskiing, snowboarding, cross-country skiing, snowshoeing, ice skating, or any other activity that you can do when it snows.

You can also visit New Zealand in July just to go on scenic drives to see snow on the mountains.

Normal hiking on trails that go up mountains is not recommended during this time of the year unless you are outfitted with snowshoes, crampons, etc. to deal with icy and hazardous conditions. 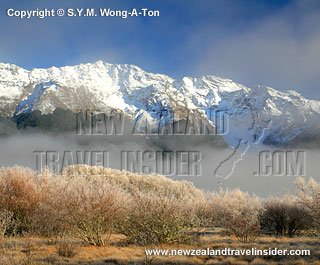 Mountains with snow in winter on the South Island

In addition, because the weather is so unpredictable, such activities can soon become dangerous and/or life-threathening with avalanches not unlikely.

Note that activities in July are not the restricted to winter activities because not all tour operators shut down in winter.

It’s just that the temperature may not be always pleasant for such activities.

In addition, scenic flights above Queenstown or Mount Cook are particularly magical during this time of the year. And if you are flying on a domestic flight from Auckland, Wellington, or Christchurch to Queenstown, you might even get a scenic flight over snow-capped mountains thrown in for free – it has happened to me several times.

Places to visit in July in New Zealand

In July, you can go anywhere that has snow. Popular places in New Zealand that get snow include Whakapapa in the center of the North Island and Queenstown on the South Island.


However, those are not the only places with snow in New Zealand.

A region that is a favorite of mine is Central Otago. A scenic winter drive on State Highway 85 toward Hawkdun Range on a nice and sunny day alone is almost guaranteed to be a feast for the eyes and soul in winter.

Another place you could visit in July is the West Coast of New Zealand, although it might be difficult to get to it from, for example, Christchurch where you would have to drive through a mountain pass that may be snowed in.

However, because the least amount of rain is expected to fall on the West Coast in July, you would enjoy the region more so as a sightseeing destination than during any other month of the year.

The weather in July tends to be very variable with a mixture of everything: rain, snow, hail, and sun. I particularly like July because the sun lies low on the horizon so is very good for landscape photography.

Ski fields usually open in June or July, but it always takes a while for a good amount of snow to fall. Therefore, I would not say that July is the best time to visit New Zealand for snow, but it is better than perhaps June.

Temperatures in July tend to fluctuate between -6 and 19 degrees Celsius (21 – 66 degrees Fahrenheit) with the warmest daytime temperatures being on the North Island in places such as Gisborne on the East Coast and Whangarei in the north.

The average daytime temperature for New Zealand is about 8 – 12 degrees Celsius (46 – 54 degrees Fahrenheit) in July.

The coldest nighttime temperatures can be found on the South Island in places such as Christchurch and Queenstown.

A lot of rain can fall in July. So it won’t surprise you to hear that July is the wettest winter month in places such as Auckland, Wellington, and Gisborne on the North Island of New Zealand.

This also applies to Christchurch on the South Island although similar amounts of rain fall in July and August in Christchurch.

Going more toward the West Coast of the South Island, July tends to be the driest winter month. 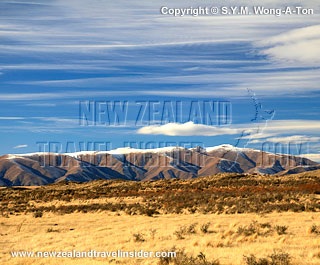 Table Mountain in July on the South Island

Places such as Westport and Queenstown receive the least amount of rain in July compared to June and August with the most rain typically falling in June.

The amount of daylight hours continue to decrease from June through July, reaches its lowest point at the beginning of July, and then slowly increases thereafter.

In conclusion, July brings approximately 9 to 9.5 hours of daylight.

Photos of winter in New Zealand in a video

This video is a collection of images that were taken in June and July. The photos should give you a good idea of what June and July in New Zealand are like in terms of the weather but also what you will be able to see.