Learn whether June is a good month to visit New Zealand, what you can do, where you can go, and what New Zealand’s weather is like in June.


June marks the beginning of winter in New Zealand and it also marks the start of the high season.

However, because the winter holiday for New Zealanders generally falls in July, June is not an overly crowded month to be out-and-about enjoying the snow – if there is any – and the winter scenery.

While I’ve mentioned the white powder, snow is not guaranteed to fall in June.

However, June generally marks the arrival of snow, or at least, snow is expected to start falling in June.

And down in Queenstown, they celebrate this snow expectation and anticipation every year in the form of the Queenstown winter festival [winterfestival.co.nz], which is usually held at the end of June.

Due to the expectation of snowfall, June is also the month that the New Zealand ski fields start to open with Mt. Hutt ski field on the South Island of New Zealand generally being the first ski field to open in early June, but not always – Coronet Peak sometimes wins.

Things to do in June in New Zealand

June is not only the first month to go skiing or snowboarding in New Zealand, but it is also a good month for scenic winter driving if you are into seeing winter scenery.

Driving on New Zealand roads can be hazardous in winter due to snow, black ice, and having to drive through mountain passes such as Lindis Pass.


But if you drive carefully and carry chains, you should be able to experience and see some of the most stunning winter landscapes on the Southern Hemisphere.

If you are looking to do a scenic winter driving tour on the South Island you may want to take a look at a 3-part article series I wrote or review the list of the best places to visit in New Zealand during winter to see snow.

Other winter activities include ice skating and heliskiing, but you can also do activities that you would normally do in warmer weather such as jet boating, kayaking, off-roading, skydiving, ballooning, or bungy jumping.

Not all tour operators tend to shut down in winter, since winter is one of the two high seasons in New Zealand.

You can even go walking on low elevation trails or snowshoeing on higher elevation trails. I particular like to hike in winter, because of the cooler temperatures and the ideal light for landscape photography.

The sun tends to lie low on the horizon in winter, so the quality of light is very good in winter. This also applies to autumn, by the way.

Places to visit in June in New Zealand

In June, people tend to head where there is snow. You can find snow both on the North Island and on the South Island of New Zealand. 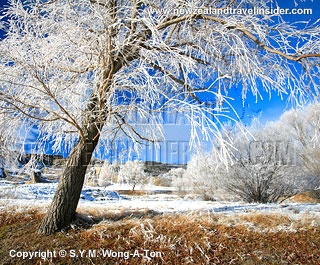 Hoar frost on trees in New Zealand in June

On the North Island, the place to be for snow would be the central plateau South of Taupo and Rotorua in Tongariro National Park.

Another location with snow would be Mount Taranaki in Mount Egmont National Park. So basically, the volcanoes on the North Island would be the places that have snow.

June marks the arrival of much colder weather to New Zealand, which includes Polar Blasts – cold air being blown up from Antarctica.

And a few localized regions in New Zealand such as for example Central Otago may experience temperature extremes.

So you have approximately 9 hours of daylight in June.

Photos of winter in New Zealand in a video

This video is a collection of images that were taken in June and July. The photos should give you a good idea of what June and July in New Zealand are like in terms of the weather but also what you will be able to see.

Find out what the current road conditions from Christchurch to Queenstown are at any time of the day, either online or offline.