Find out whether March is a good month to visit New Zealand, what you can do, where you can go, and what New Zealand’s weather is like in March.


March marks the beginning of autumn in New Zealand.

All in all, March brings variety in the weather, an occasional feel of winter with a low sun, clear crisp blue skies, and a cool breeze.

Just remember to bring warm clothing for those few chilly days and nights, especially if you’re heading to the South Island.

Things to do in March in New Zealand

Just like in December, the weather in March is variable. So you should look for activities that you can do on sunny and on rainy days.

Most of the things you can do in summer, you can still do in March. This means that you can do any activity that does not require snow because ski fields are closed in March.

Water activities in March include sailing, cruising, fishing, jet boating, kayaking, and rafting. I think the water would be too cold in March to go for a swim, but you could give it a try.

Water activities can generally be done when it is raining but not if there is a storm, because the conditions would be too dangerous for such activities.

Air activities generally require good weather although you could also bungy jump or canyon swing in the rain.

Land activities can generally be done on rainy days but are much more enjoyable on sunny days, especially if you are doing them for the scenery.

Places to visit in March in New Zealand

The same places you can visit in December you could visit in March.

While the mountains generally do not have much snow on them in March, except for the occasional dusting when a polar blast passes through, you still could head to places like Mount Cook National Park, Queenstown, and Wanaka because they should be a bit less crowded than they are in summer although this is slowly changing.


Because autumn colors are not yet on in March, I’d make March a largely bush walk month and go for walks in a place like Te Urewera National Park, which lies between the Bay of Plenty and Hawke’s Bay on the North Island of New Zealand.

The advantage of choosing such a place to go to in March is that it offers a variety of locations that can be visited on sunny days (e.g., Lake Waikaremoana) and others on rainy days (e.g., several waterfalls) [Photo: Rere Falls on the North Island (36 KB)].

And because the East Coast of the North Island is not too far away, on sunny days, you could head to the coastal regions north of Gisborne and around Napier.

If you are visiting the South Island of New Zealand, and want to do something similar, you can visit the Catlins, which is located south of Dunedin.

There you could visit waterfalls on rainy days or the coast on sunny days. And for more coastal scenery, head to the Otago Peninsula.

The weather in March in New Zealand generally looks much like the weather in February but has a feel of winter to it. 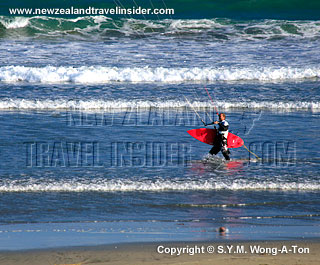 The transition from summer in New Zealand to autumn makes the weather very variable. March – and autumn as a whole – is a period of time when New Zealand can get storms, alternating days of sun with days of rain. But you can expect the sunny days to prevail in March.

In March, polar blasts start to hit the South Island, meaning that on some days the temperatures will drop and feel like winter.

Temperatures in March tend to fluctuate between 2 and 29 degrees Celsius (36 – 84 degrees Fahrenheit), depending on where you are located in the country.

Typically on the North Island, temperatures fluctuate between 6 and 27 degrees Celsius (43 – 81 degrees Fahrenheit).

Average daytime temperatures for the whole of New Zealand typically fluctuate between 18 and 25 degrees Celsius (64 – 77 degrees Fahrenheit), so March is still a pretty warm month to visit New Zealand.

The general trend is that rain tends to increase during the months of autumn, and March may sometimes be drier than February in some parts of the country. But in places like Queenstown and Wellington, March tends to bring more rain than April.

Learn when it is winter in New Zealand, what the weather is like, whether it snows in winter, what to do, and where to go to see snow in New Zealand.

Learn when is the best time to visit Queenstown New Zealand based on your interests and the things you would like to see or do in Queenstown.