Learn what November in New Zealand has got to offer, what the weather is like, where you can go, and what you can do in this month in late spring.


November marks the end of spring in New Zealand and can be seen as the month in which accommodation prices start to increase, so the start of the high season.

However, because the big summer holiday for New Zealanders starts in December, you should still be able to find a few good deals.

As far as international travelers are concerned, November is not a very busy month, and if you are looking for an alternative to visiting New Zealand in a shoulder season instead of in the busy summer season, November is the month to do so.

Things to do in November in New Zealand

November generally brings warm weather, so it is a good month for hiking almost anywhere that has a trail along a beach, in bush, or up a mountain.

Always double-check the weather forecast before you head out, though, because New Zealand’s weather is very changeable.

You can do almost anything you can do in summer because almost all tour operators are open for business.

The activities you can do in New Zealand are countless. A few suggestions include:

You could also catch a scenic flight over Mount Cook or just go for a scenic drive.

Places to visit in November in New Zealand

While most of the early spring flowers are gone by the time November arrives, lupins and other summer flowers start to pop up. You can head to Tekapo to see lupins.


You could also visit beaches in November so go to places such as Abel Tasman National Park or Kaiteriteri on the South Island of New Zealand.

If you are on the North Island, you could visit the Coromandel Peninsula, the Bay of Plenty, or Gisborne.

While November is not the best month to see snow in New Zealand, mountains like Mount Taranaki and Mount Cook should have snow on them with the chance of snow being greater for Mount Cook than for any other mountain in New Zealand.

November is a generally dry and warm month. 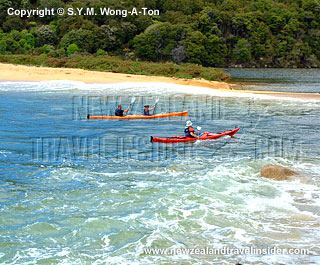 Kayaking in November in New Zealand

The amount of rainfall tends to be low in November but not always. There can be occasional days with lots of rain, some of which may even cause landslides to occur.

In addition, December can be wetter than November in places like Christchurch, Auckland, and Gisborne.

However, the amount of rainfall tends to remain below 80 mm in these places during both months.

Learn whether you’re allowed to go on Fox Glacier or Franz Josef Glacier by yourself and how to keep yourself safe when visiting the West Coast glaciers.

Should you book a rental car before you arrive in New Zealand? Or hire a car when you get to New Zealand? Read on to find out what’s best.