Learn how you can calculate the cost of a trip to New Zealand including flights, accommodation, car rental, and food.


In this article, I’ll be calculating how much a trip to New Zealand would cost if I lived in Canada, the United States, or Europe.

You can easily perform such rough estimates for yourself to be able to get an idea of the amount of money you would have to spend if you were planning to visit New Zealand.

The four basic components of any trip include:


The period I have chosen for the calculation of the cost of a trip to New Zealand is from November 6 to November 22.

I’ll be flying from Canada, the U.S.A., or Europe to Auckland and then renting a car. I have chosen to stay in 4- or 5-star hotels around New Zealand.

I’ve excluded any additional costs for travel between the North Island and the South Island by either flying or catching a ferry.

Finally, to keep the calculation simple, I’ll be listing everything in New Zealand dollars, and then converting to other currencies at the end.


The cost of flying to New Zealand

Here, I’ve picked three airlines with which you can fly to New Zealand from Toronto or Calgary in Canada, New York or Los Angeles in the United States, and the Netherlands in Europe.

Note that you can visit the website of any airline and enter travel dates to find out what airline tickets to New Zealand would cost.

For the travel period of November 6 – 22, it would cost the following to fly to Auckland in New Zealand:


So as you can see, it would cost between $1600 and $2900 New Zealand dollars to fly to Auckland on the North Island of New Zealand.

Note that sometimes it might be cheaper to book flights through a travel agent than to book them yourself, because travel agencies may have special arrangements with airlines. Just shop around for the best deal, I’d say.

The cost of renting a car in New Zealand

Car rental companies, just like airlines, vary in prices. So again, shop around, and compare them against each other.

Note that you can visit the website of any car rental company in New Zealand and enter travel dates to find out what the cost of booking a car for your trip would be.

To rent a compact automatic car (for example, a Toyota Corolla with 4 or 5 doors) without excess reduction, surcharges or optional items, it would cost the following:


To estimate the amount of money you would have to pay for fuel during your trip, you must know how large the fuel tank is of the car you are going to hire.

The tank of a Toyota Corolla can hold approximately 50 liters of fuel. Such a car would give you about 9 to 11 km per liter in the city and 13 to 15 km per liter on the highway.

Note that fuel prices are not fixed. They typically depend on the gas station you are pumping at (location and brand) and also on how the New Zealand dollar is measuring up against the US dollar.

When the NZ dollar is low against the US dollar, fuel prices tend to be high. Therefore, they can be higher than the average price I used here to calculate the cost of fuel.

Let’s round the total cost of renting a car in New Zealand (without insurance) for 13 days up to $3000 (car plus fuel).

The cost of accommodation in New Zealand

The cost of eating in New Zealand

Food can be as cheap or as expensive as you would like it to be. Generally when I’m traveling, I cook for myself or eat fast food, and avoid fancy restaurants to keep the cost down.

Let’s assume that you would like to eat breakfast and dinner at restaurants, and that you will pack your own lunch by going to the supermarket and buying groceries.

The cost of food would then look something like this:

The total cost of a 13-day trip to New Zealand

To recap, we have:

If we translate this to other currencies, you would get:

Note: Foreign exchange rates are not fixed. The amounts above were calculated when this article was written or updated.

I cannot remember the exact cost of my first solo trip back in 2001, but I think it was around € 5000 or € 6000 for a little bit more than 3 weeks of fun in New Zealand. In addition, I must add that I booked everything myself so could have perhaps saved a bit on the cost of my trip had I gone through a travel agent.

Ways to lower the cost of a trip to New Zealand

To reduce the cost of flights, you may want to consider booking your trip well in advance (for example, more than 6 months in advance) and/or choosing a period when it is less busy in New Zealand.

Typically, everyone wants to visit a place when it is supposed to be at its best so that when the law of supply versus demand starts to play a role, the prices of airplane tickets are driven up.

The key here is to look for a period when New Zealand is less attractive to others, so the least busy periods in New Zealand.

To reduce the cost of food, you could cook for yourself, but to be able to do so, you must choose accommodation that allows for cooking.

Typically this would mean staying at a motel instead of a hotel. Not all motels offer cooking facilities, though, so make sure you look at the facilities offered.

In addition, be aware that a kitchenette is not the same as a kitchen but that it can be enough for you to cook up a meal.

I’ve previously written an article about the cost of food in New Zealand, so you can refer to that article to get an idea of what food costs in New Zealand.

To reduce the cost of accommodation, you could stay in motels instead of hotels, although motels and hotels can cost the same sometimes. You could also go as far as staying in hostels, but once you reach a certain age, you tend not to want to settle for that option anymore.

I do not have much experience with hostels, because I have never stayed in any here in New Zealand. However, I have stayed with peers in hostels in France and must say that it is not a bad option if/when you are young.

Another low cost accommodation option would be renting a campervan and staying at holiday parks.

If you are considering staying for a long time in one place, you may want to look into renting an apartment, which might be more cost-effective than staying in a hotel or a motel for a long period of time although you could strike a deal (just ask).

A semi-luxurious apartment that is for short-term rental can cost anywhere from $600 per week. Another option would be renting a budget room with shared facilities in a hostel or boarding house on a weekly basis starting anywhere from $150 per week. You can find such accommodation on a website called TradeMe [www.trademe.co.nz].

To reduce the cost of renting a car, you may want to book well in advance or consider traveling around New Zealand without a car.

Another option would be to combine the cost of renting a car with the cost of accommodation by renting a self-contained campervan instead of a normal car to get around New Zealand. 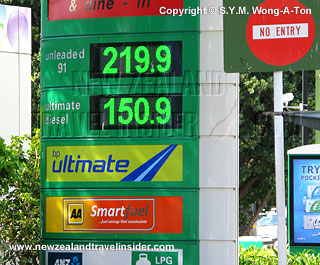 The cost of fuel in New Zealand

Just like with flights, the law of supply and demand also applies to car hire.

In addition, the closer you are to your actual travel date, the higher the price will be to rent a car, because the availability of cars tends to go down.

Another component of renting a car is filling it with fuel. Because you cannot reduce the cost of gasoline, your best option would be to reduce the amount of driving you do.

This would mean staying in cities or towns that are very close to the locations you want to visit instead of driving hundreds and hundreds of miles every day to reach your destination(s).

Conclusion on the cost of a trip to New Zealand

If you are not traveling alone but are going with someone else, it might be best to book through a travel agent, since it is highly likely that you would get better deals, because deals are generally valid for two people.

If you are traveling alone, it would not hurt to enquire about the cost of a trip to New Zealand at a travel agency. If you can book anything cheaper than the travel agent, look whether the travel agent can book part of the trip and you the other.

Unfortunately, solo travelers are not well-catered for in the tourism industry, so you must try to find ways to save money either by going your own way or partially using the help of a travel agent.

For example, on one occasion when I was not able to book flights from mainland US to Hawaii, I made use of the services of a travel agent in the US to book the flights, since no travel agent in the country where I lived back then was willing to book such flights for me.

I hope you have found this article useful and that you will be able to come to New Zealand despite the high costs that come along with making such a trip.

Find out whether July is a good month to visit New Zealand, what you can do, where you can go, and what New Zealand’s weather is like in July.