Having a hard time deciding whether to stay in Queenstown or Wanaka? Learn how these two South Island cities differ and which one is best for you.


Wanaka and Queenstown are both located on the South Island of New Zealand in what is called the Queenstown Lakes district.

Other towns in the district include Arrowtown, Albert Town, Lake Hawea, Makarora, Glenorchy, and Kingston.

Wanaka and Queenstown are still very much towns, but for the purpose of this article, I will refer to them as cities.

Look and feel of Queenstown and Wanaka

There are more people living in Queenstown than in Wanaka. So Wanaka is small compared to Queenstown.

As far as feel goes, Wanaka tends to feel more open and spacious than Queenstown. That is probably because Wanaka does not have any high-rise hotels like Queenstown does in its city centre and probably also because it has less roudabouts and shops in its town centre.

Queenstown feels very compact when driving through its city centre. The streets feel narrow – probably because there are stores lining the streets on both sides.

In Wanaka, there are shops and restaurants, but then usually on one side of the road (some of which are wide), which gives the place a more open feel.

Both cities have a mixture of old and new, but Wanaka tends to feel more new than Queenstown. 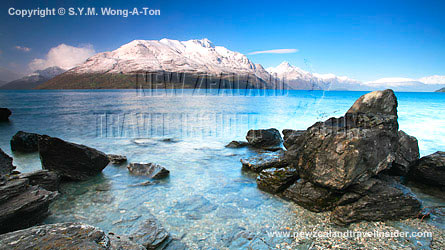 Similarities between Wanaka and Queenstown

Wanaka and Queenstown are located in a region that is very mountainous and that has lakes. Wanaka has Lake Wanaka with Lake Hawea nearby, while Queenstown has Lake Wakatipu in its vicinity.

The location of the mountains is quite different, though, when you look at the city itself. Wanaka township lies relatively far from mountains, while there is a big mountain immediately North of Queenstown. This also adds to the more open feel of Wanaka.

Wanaka and Queenstown are very similar in that both transform into ski resorts during winter in New Zealand. There is one ski field near Wanaka (Treble Cone) and there are two near Queenstown (The Remarkables and Coronet Peak). Cardrona and Snow Farm are located between Queenstown and Wanaka, so can be reached from either end.

In summer, Queenstown and Wanaka are used as destinations for activities on the water, since both have lakes, for activities in the sky such as skydiving and paragliding, and for other activities on land such as hiking, mountain biking, off-roading, etc.

While you can get some autumn colours around Queenstown, Wanaka offers much better fall foliage than Queenstown in autumn. But if you are in Queenstown, you could head to nearby Arrowtown to enjoy some nice fall foliage.

In spring, Wanaka and Queenstown are equally exciting or equally quiet, since there isn’t much going on then. But in both cases, you could drive to Alexandra, which is not too far away, to enjoy spring blossoms and other spring festivities.

Both Queenstown and Wanaka offer easy access to mountains. In Wanaka you could easily climb Mount Iron to get decent views of Lake Wanaka and the surrounding mountains, while in Queenstown, you could walk up Queenstown Hill for similar views. Both hills are not too strenuous to walk up.

For more strenuous options, choose Mount Roy in Wanaka or Ben Lomond in Queenstown. Both offer the ultimate in scenic views of lakes and mountains.

Differences between Wanaka and Queenstown

Queenstown is a bit more popular and also more accessible than Wanaka, since it has an airport. While Wanaka does have an airport, it does not get commercial flights like Queenstown airport does. So the most common way to reach Wanaka is to drive.

Because Queenstown is also much larger and there are more people living there, it also has more hotels and motels. And because of the law of supply and demand, you are more likely to find cheaper accommodation in Queenstown than in Wanaka – but not always.

The law of supply and demand also extends to petrol prices, which tend to be lower in Queentown than in Wanaka. Wanaka can generally be seen as relatively expensive when compared to Queenstown.

Queenstown also has more fast food outlets and restaurants than Wanaka. There is no McDonald’s, KFC, or BK in Wanaka. You should be able to find a Subway in Wanaka, though. And Wanaka also has a large supermarket where you can buy food if you are into cooking for yourself.

Queenstown is more bustling than Wanaka. Because so many tourists visit Queenstown every year, Queenstown caters well to them by providing ways to easily book tours, etc. Wanaka is a little bit more subdued in that respect.

If you are considering whether to stay in Wanaka or in Queenstown, I guess the decision would come down to what kind of person you are.

Wanaka tends to die down at night, while things can remain pretty lively in Queenstown at night. So if you are looking for peace and quiet, I’d definitely choose Wanaka.

But then there is the issue of cost and accessibility. If you want more choice and easy access, Queenstown would be the way to go.
I like both, but prefer to stay in Queenstown, because of the amount of facilities it provides. But if Wanaka offered more, I’d definitely stay in Wanaka.

If you decide to stay in either city, make sure to visit the other, since each is unique in its own way and the scenery around both is beautiful.

This article lists a few of the restaurants that will be serving lunch and/or dinner on Christmas Day in Wellington New Zealand in 2009.