Learn what the differences and similarities are between Wanaka and Tekapo, which are located on the South Island of New Zealand.


Wanaka and Tekapo are located on the South Island of New Zealand, about 201 km (125 mi) or 2.5 hours apart from each other.

Wanaka and Tekapo are popular tourist destinations, mainly due to the fact that both are located near lakes:


This makes them two very scenic locations to visit in New Zealand.

Look and feel of Tekapo and Wanaka

Wanaka and Tekapo can be seen as towns, since they are not large enough to be called cities.

And because there are about almost 18 times more people living in Wanaka than in Tekapo, you can consider Tekapo to be a village when you compare it to Wanaka.

It takes about the same amount of time to drive through the center of each town, since there isn’t an abundance of shops in either. But then again, that can be said of most small towns in New Zealand.

Both Wanaka and Tekapo feel very open. There are no high-rise buildings and there is just one highway passing through the town center. Wanaka is more spacious, though.

While the two towns are not super-modern, they don’t have an old or historic feel to them either.

Similarities between Wanaka and Tekapo

As mentioned previously, both Wanaka and Tekapo are located next to lakes. However, Lake Wanaka is much larger than Lake Tekapo.


They are both glacial lakes, which means that they were formed by the melting and retreat of glaciers.

And if you get tired of either Lake Wanaka or Lake Tekapo, there are other lakes nearby you can visit: Lake Alexandrina and Lake McGregor near Tekapo, and Lake Hawea near Wanaka.

Both Lake Wanaka and Lake Tekapo have mountains surrounding them and both towns offer similar recreational activities.

During winter, you can ski at Treble Cone ski field in Wanaka or Roundhill ski field near Tekapo. You could also drive a little bit out of the towns to ski at Mt. Dobson ski field between Tekapo and Fairlie, or Cardrona and Snow Farm between Wanaka and Queenstown.

While fall foliage can be found in either town and the nearby lakes during autumn, the foliage and abundance of color is more impressive in Wanaka than it is in Tekapo [Photo: Autumn at Roys Bay in Wanaka (45 KB)].

In summer, however, you can find an abundance of lupins in Tekapo, but not in Wanaka [Photo: Lupins at Lake Tekapo on the South Island (40 KB)].

In fact, Tekapo is well-known for its lupins growing next to the lake or along the highway when driving towards Lake Tekapo. 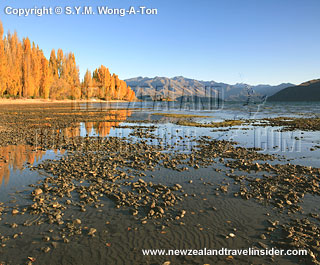 Wanaka in autumn in New Zealand

Spring is not the most exciting time to visit either town. However, it is still a good time to catch a last glimpse of snow (weather-permitting) on the mountains without the crowds.

If you are into hiking, either town could provide you with opportunities to get scenic views from above. Try Mount Iron in Wanaka if you are looking for an easier walk or Mount Roy if you want to get the ultimate in scenic views. You could also do the Diamond Lake walk to see Lake Wanaka from a different viewpoint.

The best time to do this walk is when there is a greater chance of snow on the mountains, so in winter or spring.

Because of the size of Tekapo, you should expect accommodation prices to be higher than in Wanaka, although Wanaka is not cheap either. Both towns can be seen as relatively expensive places to stay.

Accommodation in Tekapo is expensive due to the law of supply and demand (there is more demand than supply), due to the location of Tekapo (it is more or less in the middle of nowehere), and due to its popularity with tourists.

Wanaka is a little bit more inhabited and not so much in the middle of nowhere, but it also has a status of being an exclusive resort, which is why prices tend to be high there too.

Differences between Wanaka and Tekapo

The obvious difference between Wanaka and Tekapo apart from their size is the color of their lakes.

Lake Wanaka has a nice deep blue color, while Lake Tekapo has a bright turquoise blue color that is caused by tiny particles (also called rock flour) that are suspended in the water and that have been ground from the underlying rock by glaciers.


Another difference between Wanaka and Tekapo is ease of access. The quickest way to access Wanaka would be to fly to Queenstown and then drive from Queenstown to Wanaka.

The easiest way to access Tekapo is to fly to Christchurch airport and then drive from Christchurch to Tekapo.

While you could also fly to Queenstown and then drive to Tekapo, the journey would be slightly longer than if you drove from Christchurch, and you would have to go through a mountain pass (Lindis Pass), which depending on the season, could be closed.

Tekapo is quite isolated and located in a region where there isn’t an abundance of facilities, which includes large supermarkets or fast food restaurants. There is no McDonald’s, KFC, etc. in Tekapo. Neither can you drive less than 2.5 hours to find one.

However, there are a couple of smaller restaurants and fast food outlets (including pizza and takeaways) in Tekapo where you can get a bite to eat. You can also eat at restaurants of hotels that are located in Tekapo.

Wanaka is different. It has a large supermarket and you can drive either to Queenstown or Alexandra for fast food restaurants that cannot be found in Wanaka.

Deciding whether to stay in Tekapo or Wanaka might come down to how many facilities you are looking for in a town.

If you are someone who likes to shop at large supermarkets and have an abundance of other facilities around you, then Tekapo might not be the town for you to stay in.

And if you are looking to keep costs down without having to stay in backpacker accommodation, Wanaka might be the better option, although it is not that cheap.

Where visiting the lakes are concerned, I would recommend visiting both if you can, and definitely not skip Lake Tekapo, even if all you do is pass through the town. You need to be able to say that you visited Lake Tekapo and saw that marvelous lake.

Should you book a rental car before you arrive in New Zealand? Or hire a car when you get to New Zealand? Read on to find out what’s best.

Get tips on where to go, what to see, and what not to miss in this 3-part series for setting up a self-drive itinerary to see snow on the South Island.