Learn when it is winter in New Zealand, what the weather is like, whether it snows in winter, what to do, and where to go to see snow in New Zealand.

The months that make up winter in New Zealand are June, July, and August.

Winter can be one of the best times to visit New Zealand if you avoid the winter school holidays in July, because ski slopes tend to become very busy then.

Images of snow-capped and snow-covered mountains in New Zealand have become all too familiar and the hallmark of especially the South Island of New Zealand.

Unfortunately though, such images have also risen the expectation and assumption that New Zealand experiences extremely cold temperatures and that snow continuously falls in winter, which is certainly not the case.


Temperatures in winter in New Zealand

The amount of daylight hours continue to decline from the end of autumn into winter until it reaches its lowest point around the end of the first week of July after which it starts to increase again.

July is usually the coldest month in winter with the lowest temperatures between -6 and 19 degrees Celsius (21 – 66 degrees Fahrenheit).

However, this does not differ a whole lot from temperatures in June or August, which lie between -5 and 20 degrees Celsius (23 – 68 degrees Fahrenheit).

Winter snow in Central Otago on the South Island

So after July, temperatures tend to increase and return to what they were in June.

Does it snow in New Zealand?

While snow is not uncommon in April, snow generally starts falling by the end of autumn in May and continues to fall throughout winter in June, July, and August.

The last months in which snow falls are September and October. And because of the latter, ski fields remain open until early- to mid-October.

However, don’t expect the ground to be continuously blanketed with snow. Snow generally falls at higher elevations and only occasionally does it reach the ground during winter.

Therefore, high mountains such as Mount Cook are always snow-capped no matter what time of the year it is.

The only time you’re almost guaranteed to see snow is when you drive through mountain passes such as Lindis Pass after a cold snap (with precipitation) has passed.


Forecasting snow or any other type of weather is generally based on computer models.

And while such models may come close to saying what is to or will come, Earth does not work according to models.

So snowfall can never be predicted years, months, or even weeks in advance. Generally, it is a matter of wait and see. The closest you can come to a reasonable prediction is a week in advance.

What to wear in winter in New Zealand

Just like in autumn, it is best to wear layers in winter so that you can easily add or remove them as it gets colder or warmer.

You can start with wearing long underwear as a base layer that is made of wool to keep you a little warm and wick moisture away from your body.

Next comes an insulating layer (synthetics or wool) that is a little bigger than your base layer and that provides warmth. Examples include all-wool sweaters and fleece.

Finally, you should add a weatherproof layer such as a waterproof and windproof but breathable jacket. Do not forget gloves and carry a couple of pairs of wool or polyester socks.

If you are going skiing, ensure you have proper clothing for that, although you can also rent such clothing in places like Queenstown.

The South Island can get very cold at night. Hotels and motels sometimes provide electric blankets, which generate heat through electricity that can be adjusted via a switch.

However, if such a blanket is missing, ensure you have something warm to sleep in. 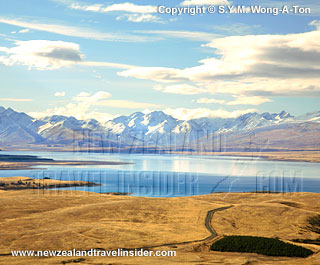 Lake Tekapo and mountains with snow in winter

I always walk with a thick winter jacket – a down filled puffy jacket would work well – when visiting the South Island in winter.

Just like in autumn, the weather is very changeable and unpredictable in winter and especially when you are in mountainous regions such as Queenstown-Lakes District (Queenstown, Wanaka, Kingston, and Arrowtown) and Mackenzie Country (Tekapo and Mout Cook).

Where to go in winter in New Zealand

Most tourists visit New Zealand in winter for skiing, snowboarding, cross-country skiing, snowshoeing, and tubing. Heliskiing is also a popular adrenaline-pumping activity you can do in winter.

New Zealand has 25 ski fields, 18 of which are commercially operated. Opening dates for New Zealand ski fields generally fall in the beginning of June but are very dependent on snow conditions, so ski fields may open later if there isn’t much snow on the mountains.

There are two main regions that are popular with tourists in winter:

Note that winter sport and activities are not the only activities you can do in winter in New Zealand. Other tour operators are also open for business. So you can also go cruising, jet boating, horse trekking, quad biking, 4WD touring, bungy jumping, rafting, skydiving, hot air ballooning, etc.

Or you can take a more relaxed approach and go scenic driving to places where you can see snow or soak yourself in a hot pool, for example, in Taupo on the North Island or Hanmer Springs on the South Island.

Driving in winter in New Zealand

Driving in New Zealand can be hazardous in winter but probably not as hazardous as driving in Alaska in winter – which I have done, by the way.

I know I tried to avoid visiting New Zealand in winter on my first solo trip to New Zealand because I did not want to have to drive on snow and ice.

I was a relatively inexperienced driver – just had my license for a little less than two years – and had never really driven in such conditions. So the thought of it was daunting.

I soon learned that the roads are not always snowed-in in winter and that they can be slippery early in the morning and in areas that do not get much sun. But if you take the necessary precautions, you should be fine.


And while a 4WD vehicle is handy if you plan to drive up to ski fields, it is not required to be able to drive on normal roads and highways. All you have to do is make sure you carry snow chains at all times, should they be required.

[Photo: Ben Ohau with snow in winter on the South Island (24 KB)]


Photos of winter in New Zealand in a video

This video is a collection of images that were taken in winter. The photos should give you a good idea of what winter is like in New Zealand.