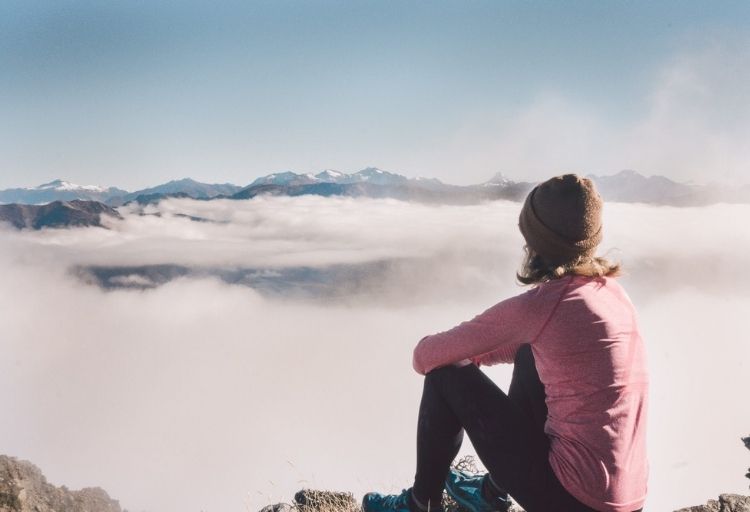 My 24-day solo travel itinerary for New Zealand with the places I visited, the things I did, and things I would do differently if I had to repeat the trip.

When I traveled solo to New Zealand for the first time, I started and ended my trip in Auckland, but visited both the North Island and the South Island.

There are several things I would do differently if I were to repeat such a solo trip today.

In this article, I’ll outline where I went and what I did – without getting into too much detail – and also tell you what I would change about my solo travel itinerary for New Zealand.

Many of the locations I will be mentioning here are also on the top 10 list of places tourists to New Zealand visit.

I landed in Auckland two days after I left the country I was living in at the time – the Netherlands.

So if you are flying from Europe or the American continent (USA or Canada) to New Zealand, always keep in mind that when you arrive it will be two days later in New Zealand.

In addition to that two days later, it is highly likely that you will be jet-lagged. And because of this, I decided not to rent a car at Auckland International Airport but rather catch a relatively cheap shuttle and head directly to the hotel I booked.

And then the next morning, I felt fresh and awake enough to pick up a rental car from a car rental location in Auckland’s Central Business District.

What I would change: Nothing. I’m not a city person, and Auckland is too large and busy for me, so I was happy to spend one night and then get out of the city the next day.

I drove from Auckland to Rotorua, which is about 3 hours driving. I won’t tell you the story of getting lost in Auckland, but yes, it happened.

The drive was relatively easy once I found the Southern Motorway.

I spent 3 nights in Rotorua but had to split my stay between two hotels, because I was unable to get 3 consecutive nights at one hotel.

I wanted to do a walk at Tongariro National Park, but the weather was so bad that they advised against it, so I wound up driving back to Rotorua. I also spent an entire day just driving on highways around Rotorua.

What I would change: Plan better. Always have both good weather and bad weather activities planned for any place you are visiting. I should have also booked my hotels earlier so that I would have gotten consecutive nights at one hotel. Moving between hotels is a waste of time.

The drive from Rotorua to New Plymouth was a long one; around 4 hours. When I arrived in New Plymouth, it was raining, so I checked into my hotel and then went driving around a bit to orient myself.

The next day, I visited Mount Egmont National Park and did a walk. Again, I won’t tell you how I got lost in the bushes around Mount Taranaki, but I did and survived.

In the afternoon, I drove to Lake Mangamahoe and finished my day with a nice view of Mount Taranaki from afar.

What I would change: Plan better. As in Rotorua, have a plan for good weather as well as bad weather days. I did not have much to do on the bad weather day and was lucky that the sun came out the following day; otherwise, again, I would have had nothing to do but drive around.

I drove from New Plymouth to Wellington, which took me about 5 hours. It was a breeze to find my hotel, which was located on Willis Street.

Since I did not have many hours left in the day, I walked into the CBD and caught the Wellington Cable Car [wellingtoncablecar.co.nz] up to the Wellington Botanic Garden, and then followed the path down to the Main Garden and then up and out toward the cemetery and the Beehive.

You can visit the Beehive [www.parliament.nz] for a tour if you want to, but I didn’t, since it was already too late in the day.

The next day I drove to the ferry terminal and caught the ferry to the South Island.

What I would change: Nothing. I hate cities, remember? So one day in Wellington was enough for me.

When I arrived in Picton, it was sunny, but as I was driving to Motueka, the rain came pouring down. I checked into my motel and went to grab something to eat.

The next day, I drove to Kaiteriteri for a pre-booked kayaking tour, which got cancelled due to bad weather. I got a refund.

When it stopped raining, I drove up and over the Takaka Hill, and then down to Totaranui Bay. When I wanted to leave, I couldn’t, because the road had been blocked by a massive slip. I won’t go into the details how I got myself out of that predicament, but I did.

The next day I drove to Marahau, caught a water taxi out to Bark Bay, and walked back to Marahau via the Abel Tasman Coast Track.

What I would change: Plan better for rainy days. Never drive to a place that has only one road in or out of it, especially not when a lot of rain has fallen.

I drove from Motueka to Fox Glacier and made a brief stop at the Punakaiki Pancake Rocks. This was a massively long drive, which I do not recommend anyone doing. It’s about 6 hours driving, but I think it took me 7 or 8 including the stop.

When I reached Fox Glacier, I just checked into the motel, and did nothing else, since it was late. Note that I had bought food and supplies in Motueka and had taken those along with me, since Fox Glacier is not a place with lots of supermarkets or restaurants.

The next day, I briefly visited Lake Matheson at sunrise, and then went on a Fox Glacier hike. Back in the days (more than a decade ago), you were allowed to walk on the glacier. These days I think you can only get close enough with a tour company to see it.

When I got back from the hike, I did another easier walk called the Chalet Lookout Track that allowed for glacier viewing from afar.

What I would change: Nothing.

The next day was a long driving day to visit the Catlins where I did the Matai Falls walk, Purakanui Falls, and visited Nugget Point. On the way back to Queenstown, I stopped at the Clyde Dam Lookout.

The next day, I drove up the road that leads to the Remarkables ski field and took a couple of photographs.

Then I visited Wanaka and did the Mount Iron walk.

In the afternoon, I went up the Queenstown Gondola [skyline.co.nz] and took an iconic photograph of Queenstown from above as the sun set and the town lights came on.

Then the following day, I walked up Ben Lomond, or at least attempted to. The walk up the mountain was too strenuous for me that I did not make it all the way to the top; just to the Ben Lomond Saddle. So I have yet to conquer Ben Lomond, and to be totally honest, I’m getting too old for that.

On my last day in Queenstown, I did a Fly-Cruise-Fly tour. I was picked up from my hotel in the morning, joined a party of two (as an add-on) in a small airplane to Milford Sound, did the Milford Sound cruise, and then flew back.

What I would change: Nothing. The weather was good when I was in Queenstown, so I was able to do my activities as I had planned them. But it would have been better to spend 4 nights in Queenstown instead of 5, because I tend to get bored with places very fast. So if you know that you are the same, do not spend too much time in one place.

I drove from Queenstown to Tekapo via Lindis Pass, which took approximately 3 hours, and went straight to the hotel to check in and drop off my luggage.

Then I briefly drove from Lake Tekapo to Mount Cook National Park via Highway 80 to get information about possible walks I could do.

When I was going to get into my rental car, I noticed that one of the car tyres looked flat. I won’t tell you the whole story, but eventually I changed the tyre myself.

I got the tyre fixed the next day, and then drove to Mount Cook National Park again to do the Kea Point Track.

The following day, I joined a party of two (as an add-on) on a scenic flight over Lake Tekapo and Mount Cook.

The weather was good, so after the scenic flight, I drove to Peters Lookout to take a couple of photographs of Mount Cook and Lake Pukaki.

The day thereafter, I visited Mount Cook National Park again to do the Hooker Valley Track. On my last day in Tekapo, the weather turned for the worse, so I decided to drive all the way to the East Coast to visit the Moeraki Boulders, and then drive back.

What I would change: Plan better for days when the weather is gloomy or rainy. It would have been better to spend 3 or 4 nights in Tekapo instead of 5.

After that, I strolled around Christchurch, visited the Christchurch Botanic Gardens, and then went back to my hotel.

The next morning, I grabbed a taxi to Christchurch Airport, where I caught a domestic flight to Auckland.

What I would change: Nothing. One day was enough for me to see Christchurch. I think you know why by now…

When I arrived back in Auckland, I caught a hotel shuttle to the hotel, which was close to the airport, and pampered myself with room service.

The next day, I caught the hotel shuttle back to the airport and flew back to what was then my home.

What I would change: Probably do a bit of sightseeing in Auckland before I left, but sightseeing is not much fun when you hurry, so I skipped it.

Final Words On My Solo Travel Itinerary For New Zealand

As you can see from what I wrote above, most of the things I would change fall in one of two main categories:

I hope you have found this solo trip outline useful. Thanks for reading! 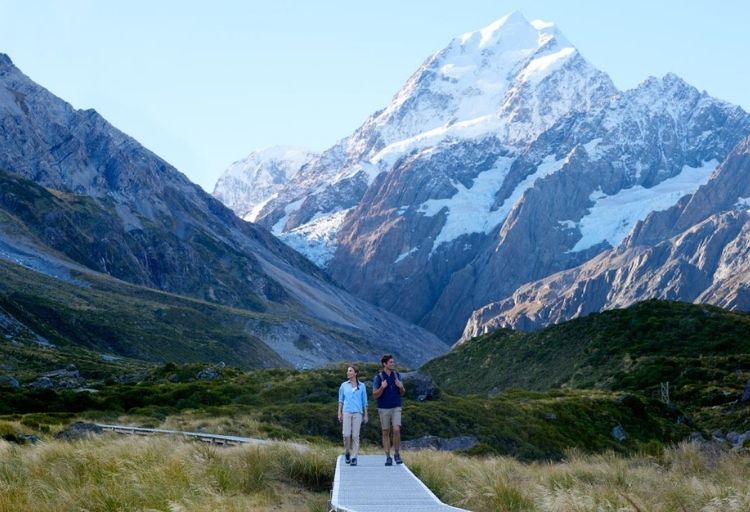 This 9-day itinerary lists places to go to see mountains on the South Island of New Zealand with a self-drive tour that starts and ends in Christchurch. 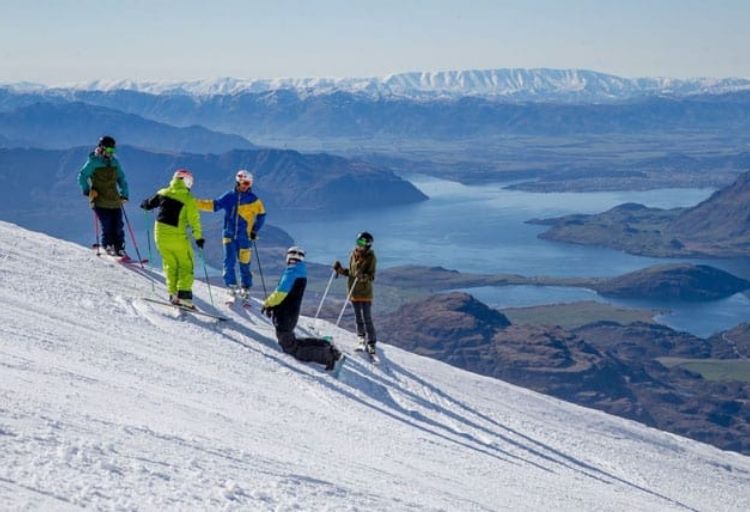 Decide when to visit and where to go on the South Island of New Zealand for snow on mountains and set up a self-drive itinerary by using this article.